One of the most scenic drives Utah has to offer is the Ogden River Scenic Byway, which is really two drives rolled into one: Ogden Canyon and the Monte Cristo Highway, both of which are SR 39. In this post, we'll look at the history of SR 39 as well as some of the routes it connects to in the Ogden area.


The road now known as SR 39 dates all the way back to July 18, 1911, when the state legislature added a road from Ogden to Huntsville to the state highway system. In 1919, this road was included in section F of the state highway law, which defined a corridor from Ogden through Huntsville and Woodruff to Randolph. Over the next two years, a federal-aid project made improvements to the Ogden-Huntsville road. The portion from Woodruff north to Randolph was transferred to another highway in 1921 (that would become SR 3, and is now SR 16). And in 1927, when numbers were assigned to all state highways, the Ogden-Woodruff highway became SR 39.

Back then, 39 followed significantly different alignments through Ogden and Huntsville than it does today. The original western terminus was in downtown Ogden, at Washington Blvd (US 91) and 24th Street. From there, it went east on 24th, north on Harrison Blvd, and northeast on Valley Drive into Ogden Canyon:


It also followed a different alignment through Huntsville. Before 1934, Pineview Reservoir did not exist. I don't know of any detail maps of the area from that far back, but this map suggests a route into Huntsville directly from the west:


Perhaps that route came through Cemetery Point and entered directly on First Street. At any rate, construction on Pineview Dam began in 1934...but the dam was smaller than it is now, and Huntsville was simply located at the east end of it rather than on a peninsula. The new 1930s alignment of SR 39 entered from the south on 7100 East, then turned east on First Street:


In 1935, the state created SR 103, continuing a state highway south on Harrison to US 30S southeast of Ogden:

Route 5 was just the legislative designation for US 30S and soon-to-be-extended US 89. At the time, the road that now carries US 89 did not exist in the eastern part of South Ogden. Instead, 30S/89 ran along what's now 5600 South and Wasatch Drive, and the point where Harrison intersected those roads was the southern terminus of 103:


From route 39 near Harrison Boulevard in Ogden, northerly via the Utah State tuberculosis sanatorium to Second street, thence west to the army supply depot.

Once again, we have to consider that several roads in the area didn't exist at the time: in particular, Harrison Blvd did not exist between today's 9th Street and 20th Street due to the Ogden River Canyon. Canyon Road did exist, but on an alignment slightly farther north and east than what is there today. SR 203 followed that northwest from Valley Drive (SR 39) at the mouth of Ogden Canyon to Mountain Road, north to 9th Street, and west to Harrison Blvd - which did exist north of 9th.

From there, SR 203 went north on Harrison and passed the Utah state tuberculosis sanatorium. (The Utah School for the Deaf and Blind now occupies this location; the site has been served by a series of state routes that will be covered in a future post.) The route turned west on 2nd Street, crossed US 30S/89/91 and SR 204, and continued on to the US Army's Utah General Depot - presumably created due to the outbreak of World War II. Based on topo maps, it looks like the actual west end of SR 203 was located just east of the Union Pacific railroad crossing.

At some point around 1950, US 89 was moved to its modern alignment through South Ogden. This required a short southward extension of SR 103, bringing its southern terminus very close to where 203 ends now (more on that later).

In 1953, the entire north-south portion of SR 203 was truncated, leaving only the part on 2nd Street from the defense depot to Harrison Blvd. That was the case when this map was made. Although no 203 shields made the map, it's fairly obvious where the route went, and the old alignment southeast to SR 39 at Valley Drive is visible as well.

(The SR 38 shield on that map is an error; usually older USGS maps are more accurate, but the occasional mistake does make it in here and there.)

Meanwhile to the east, Pineview Dam west of Huntsville was raised 34 feet to its modern height in 1957. This would flood some of the lowlands near Huntsville and put the town on the peninsula it occupies today, but it also meant a new alignment was needed for SR 39. The new road completely bypassed Huntsville to the southeast; it hasn't changed since, and it can be seen on the modern aerial imagery below.

That image was taken in the fall after one of northern Utah's driest winters on record, so the lake level is lower than normal. During such times of low water, the old SR 39 alignment into Huntsville from the south becomes exposed - the road itself has washed away, but the embankment upon which it sat is clearly visible, cutting across the wetlands near the left edge of the image. And if you take a close look at the old roadway, you'll notice the original bridges over both branches of the South Fork Ogden River still stand. But that old alignment wouldn't even be drivable in an ATV without fording streams; a small stream near the north edge of the lake has cut directly through the embankment, as has the South Branch of the South Fork Ogden River - bypassing the original bridge.

Returning back down to Ogden a few years after that, the city requested a mileage swap with UDOT. They wanted to make 12th Street from Washington Blvd (US 30S/89/91) to Harrison Blvd a state highway, in exchange for removing nearby SR 183A (7th Street) from the state system. (Of course, note that Harrison didn't exist at 12th yet.)  This was done in August 1963, and approved by the legislature the next winter. The new highway on 12th Street was designated SR 205.

But that highway wouldn't even last a year. In 1963, SR 39 was rerouted off 24th Street and Valley Drive and onto 12th Street and Canyon Road - absorbing the year-old SR 205. The portion on Valley Drive was removed from the state system, while the 24th Street segment became an eastward extension of SR 37 (we'll talk about that in a future post, too).

In addition, at this time SR 203 was extended back south, but this time all the way to US 89. From 2nd to 9th Streets, it followed its pre-1953 routing. It then followed a proposed connection through the Ogden River's floodplain to 20th Street/Valley Drive, where it took over the four-block section of SR 39 between 20th and 24th Streets. South of 24th, it completely absorbed SR 103, eliminating that state route designation. The new connection between 9th Street and 20th Street would be completed a few years later in 1967.

The 1964 changes are shown on this map. To avoid unnecessary clutter, with the exception of the US Highway through town I've left off any routes that do not directly relate to this blog post. 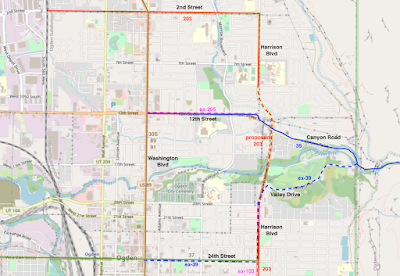 In 1965, SR 39 was extended west again to 1900 West (SR 84, now SR 126) in order to serve the new 12th Street interchange on I-15. And in 1969, it was extended even further to 4700 West (SR 40, now SR 134) although this extension was not open until the following year.
The fact that 39 was extended in 1969 is somewhat unusual; that year featured a systematic mass decommissioning of over 90 state routes, and even more were truncated in some way. SR 203 was one of those: the entire route north of 12th Street (SR 39), including the portion on 2nd Street and the connection to the Defense Depot, was turned back to local jurisdiction. That reduced 203 to its current extent.

SR 39 would receive a few minor realignments in the Canyon Road area. The 1964 map above shows a sharp curve where 12th Street became Canyon Road; that had been straightened out by 1970. Two more minor realignments would occur between Harrison and the mouth of Ogden Canyon; here is a 1970 document showing them:

SR 39 has not changed since then, but the south end of SR 203 has gone through multiple stages of reconfigurations. The original configuration was a skewed intersection, but it looks like it probably was not possible to continue straight through northbound:

Note the erroneous SR 103 designation...103 had changed to 203 three years before. This was fixed on the 1970 map, but by then the intersection had also been reconfigured to two intersections (probably in conjunction with widening US 89 to four lanes). The main 89/203 intersection became a standard 90-degree intersection, with the previous alignment being used for a right-turn lane. The continuation of Harrison southward is known as 1550 East; it got its own three-way intersection with 89.

That was a relatively short-term arrangement, though. By 1978, Harrison and 1550 East were once again combined into a single skewed intersection at US 89, probably to allow for a dual left from southbound Harrison:


That image also shows the construction of a road running southwest from US 89 here. That would become Ridgeline Drive, but it did not connect to 89 due to its close proximity to the Harrison intersection.

Until 2015, that is. At that time, Harrison was once again realigned to a 90-degree intersection with US 89, this time connecting to Ridgeline Drive on the other side. The new intersection features a rare triple left turn from southbound Harrison to 89. 1550 East is now a right-in/right-out (RIRO) from southbound 89:

In 2019, the right turn from northbound 89 to Harrison was widened to two lanes. And further updates to this configuration are likely coming in the near future: current plans call for US 89 to be upgraded to a freeway from Davis County north through I-84, and it will transition back to the current at-grade expressway somewhere in this area.

We'll start out heading west from I-15: