For this post, we'll return to the urbanized areas of Utah and discuss some of the east-west routes in the mid-southern part of the Salt Lake Valley. Today, we'll focus on the routes that have served the general region between the Kennecott Copper Mine, the Midvale/Sandy area, and the mouth of Little Cottonwood Canyon.

SR 48 and the Copper Mine


48. From Midvale Junction to Bingham.

Midvale Junction was the intersection of State Street (US 91) and Midvale's Center Street (7720 South). From there, 48 headed west on Center, which became 7800 South upon exiting Midvale. Then it turned on what is now called the Old Bingham Highway - probably just the Bingham Highway back then - running southwest and west to Copperton. The Old Bingham Highway is not drivable as a continuous road today due to a discontinuity at 9000 South, but it connected in 1940:

From there, SR 48 continued southwest to the city of Bingham Canyon, where it ended at the north city limits. Bingham Canyon was the most substantial mining town in the Oquirrhs, housing personnel for the Bingham Canyon open-pit copper mine (the largest of its type in the world). The following USGS map does not show the terminus correctly (it has the 48 designation continuing too far south), but it shows the Bingham Canyon city limits and what the town looked like:

Interestingly, the 1950 Shell map showed a portion of 48 in Tooele County:

If that map were to be believed, SR 48 was extended west over a yet-to-be-built roadway through the Oquirrh Mountains to Middle Canyon Road, then west into Tooele. However, this change does not appear on any other maps from that time period, nor is it indicated in any highway resolutions or legislative descriptions (which often were changed before roads were actually built). So I'm going to say this is an error.
At some point around 1950, the route was adjusted in the Salt Lake Valley as well. SR 48 no longer used the Old Bingham Highway; instead, it continued further west on 7800 South before turning southwest on a new road, naturally called the New Bingham Highway, meeting up with the old route just east of Copperton. This change appears on USGS maps as early as 1951. Here's a 1959 map that shows all of 48:

By 1968, Bingham Canyon was beginning to shrink as a mining town, and the size of the city limits had been decreased as a result. So in order to keep the west end of 48 at the city limits, the route was extended southwest 0.3 miles.

But since then, the Bingham Canyon Mine has continued to expand, and the west end of the state highway has been truncated several times as the mine grew bigger and bigger. By 1973, the mine had essentially wiped out the entire Bingham Canyon town. Kennecott, the company that owned the mine, requested to move its guard station to a point 1.25 miles east of the SR 48 terminus. UDOT denied that request, but agreed to abandon SR 48 west of that point on the condition that Kennecott assume responsibility for that segment. Kennecott agreed, and the endpoint was moved to a location described as "1.8 miles west of the Copperton post office".

Here's a map from the 1973 State Road Commission resolution. Red indicates a roadway removed from the state system, while blue shows a removal from the federal aid secondary system - in this case, simply abandoned.

That lasted until sometime between 1997 and 2004 (likely sometime around 2000). At that point, another 3/4 mile or so was shaved off, bringing the western terminus about a mile west of Copperton. And then around 2012, it was truncated again to just west of the Copperton township limits.

If you think all that is confusing, you're not alone. Here's a map showing the incremental truncations of the state highway through Copperton, as I understand them: 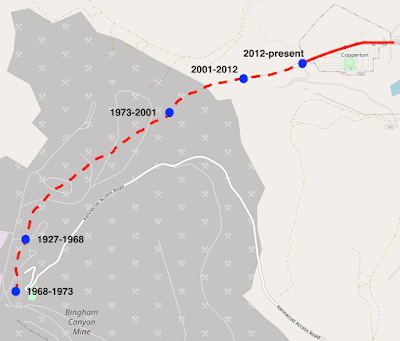 That also serves as a commentary on just how big the copper mine got. The farthest terminus was once the site of a town of 15,000 people. Today, the entire town and three miles of state highway have been completely wiped out.

The Coming of the Interstates

In the mid-1960s, I-15 was being constructed through the central Salt Lake Valley. The new interstate would not include an interchange at Midvale's Center Street; rather, the Midvale interchange was placed at 7200 South. So in 1965, in order to serve the new interchange, the east end of SR 48 was moved to State and 7200 South, running west from there through the I-15 interchange. It connected back to the previous Center Street alignment by way of Midvale's Main Street and Holden Street. That alignment can be seen on the map below.

The next interchange south on I-15 was placed at 9000 South. In order to have a state highway serving this interchange, at the same time as SR 48 was moved, the State Road Commission designated a new SR 177, which ran along 9000 South through the new interchange from Redwood Road (SR 68) to State Street (US 89, then also US 91).

Four years later, in 1969, another route was added in this area, this one connecting State Street in Sandy and SR 210 at the mouth of Little Cottonwood Canyon. Numbered SR 209, the new route followed 9400 South and Little Cottonwood Road.

All three adjustments can be seen on this 1978 map:

SR 177 and 209 were clearly intended to function as one east-west corridor, and in most states, they probably would have been one route with a four-block concurrency on US 89. But given Utah's track record with avoiding concurrencies, it's unsurprising they ended up as two different routes.

But in 1987, a new road was built extending 9000 South a few blocks beyond 700 East, then shifting south onto the existing 9400 South alignment. The full east-west highway from Redwood Road east on 9000 South, southeast on the new road, and east on 9400 South to Little Cottonwood Canyon was designated SR 209. This western extension of 209 fully absorbed SR 177, which was deleted at that time. In addition, the segment of 9400 South between State Street and the new SR 209 alignment was removed from the state system, as it had been replaced by the new 9000 South alignment.

But UDOT wasn't done making changes in this area. In 1998, a new bridge over the Jordan River was built on a new road connecting 7000 South at Redwood Road with 7200 South at 700 West (Midvale Main St). This new road was named Jordan River Boulevard. In 2000, SR 48 was moved to use Jordan River Blvd and 7000 South west all the way to Redwood Road, where it turned south along an implied concurrency with SR 68 (!) to 7800 South, where it resumed its earlier alignment. Main Street, Holden Street, Center Street, and 7800 South east of Redwood were all turned back to their respective cities at that time.

Here's a 1999 map showing the pre-2000 alignment through Midvale, as well as the roadway that would become SR 48 the next year:

UDOT still wasn't done, though, and plans called for extending 209 further west. In 2005, the western terminus in SR 209's legislative description was revised to "Route 48", which would have extended 209 west on 9000 South to a junction with the New Bingham Highway. However, most of that road didn't exist yet; 9000 South ended at the Old Bingham Highway at the time. So despite the description change in 2005, because 9000 South didn't connect through yet, SR 209 was never actually extended past Redwood. By 2009, 9000 South was continuous through to 5600 West, but didn't yet connect to SR 48.

When the connection to SR 48 was finally made in 2012, it took a slightly different form than had been expected previously due to the construction of the Mountain View Corridor. With the new configuration, 9000 South was extended west through an intersection with the Mountain View Corridor and now tied directly into the New Bingham Highway towards Copperton, while the New Bingham from the east was cut off at 5600 West.

As a result, SR 48 was moved to use 9000 South (through the Mountain View intersections) and 5600 West to connect between the two surviving portions of the New Bingham Highway.

But that arrangement only lasted three years. In 2015, SR 48 was truncated all the way back to Bangerter Highway, with 209 finally getting its long-planned western extension - all the way to the copper mine, replacing 48 west of 5600 West. The remaining portions of SR 48 (on 5600 West and the eastern half of the New Bingham Highway) were removed from the state highway system.

Here's a map from the relevant Utah Transportation Commission resolution. Here, blue represents the portion of 209 added to the state system in 2015, green indicates the portion of 48 renumbered to 209, and red is used for the decommissioned part of SR 48.