One of the strangest routes on the Utah state highway system today is State Route 45. It's a 40 mile spur in northeastern Utah that serves almost no population, ends at a random intersection with a dirt road, and does not junction any other state routes other than at its northern terminus at US 40. So why does a route like this still exist?

To begin answering this question, we'll need to go back all the way to 1925, when the state legislature designated a short spur off SR 6 (later US 40) near the Colorado state line. At first this spur was numbered as a branch of SR 6, but in 1927, it became SR 45:

Other than its nearby location, this didn't really bear much resemblance to the modern SR 45. None of it is still a state highway, and it served a very different purpose:


Most of that version of 45 is now Snake John Reef Road (Uintah CR 3170), aside from a minor realignment near its junction with US 40. As that map shows, SR 45 connected to SH 64 at the Colorado line, which continued southeast to the town of Rangely. The modern alignment of SH 64 heading south from what is now Dinosaur, CO (then called Artesia) didn't exist yet, so SR 45 was part of the main road connecting Rangely to the northwest.

At some point in the early 1940s, Colorado began to build a road connecting Artesia to SH 64, which would become the primary route out of Rangely and bypass SR 45. As a result, the Utah state legislature completely repurposed SR 45 in 1943. Snake John Reef Road became a county road, and SR 45 was redefined:

That was done primarily to serve Gilsonite mining efforts near Bonanza. This version of 45 at least served a similar purpose as it does today, but it used a rather different route to get to Bonanza from 40. Although a portion of the 1943 alignment near Bonanza is still SR 45, most of the route was along a road now called Old Bonanza Highway (Uintah CR 3150), with the northern terminus at a junction with US 40 about halfway between Jensen and the Colorado line.

SR 45 was extended even further south in 1945. Now, the road continued over the White River and proceeded southeast on Dragon Road (CR 4180), passing through the mining town of Dragon before ending at the Colorado state line. From there, one could take an unimproved road south to US 6/50 west of Mack, Colorado - Wikipedia claims this connection to Mack was briefly SH 395. At the same time, SR 207 was created as a spur southwest from 45 to the townsites of Watson and Rainbow. That followed today's CR 4190, or what Google calls Kings Wells Road.


Dragon, Watson, and Rainbow were all founded as Gilsonite mining towns. But here's the really weird part - by 1945, when 45 and 207 were extended and created, all mining activity had ended at those locations. For the first few decades of the 20th century, Gilsonite was mined near those three locations and then shipped down the Uintah Railway, a narrow-gauge railroad that ran southeast to Mack. But in the 1930s, almost all mining activity moved to areas north of the White River near Bonanza. The railroad never made it past Watson, so Gilsonite transport pretty much shifted to trucking to Vernal and Craig. As a result, the railroad line to Mack was removed, and all the mining towns south of the White River were abandoned.

That explains why a route to Bonanza was added in 1943, but the 45 extension and 207 creation in 1945 still don't seem to make much sense. Perhaps this was to ensure a road existed down there in case mining activity ever moved back south of the river.

That never materialized, though, and in 1968, after the state built a pair of bridges on SR 45 over Evacuation Wash (near Dragon), SR 207 was decommissioned entirely and 45 was cut back to Bonanza. More specifically, the new south end of 45 was at the intersection with Chipeta Wells Road, a county road that runs west to Ouray.

In 1957, the State Road Commission proposed the creation of SR 264, which was approved by the legislature in 1961. Unlike the other routes branching off US 40 in this area, this new highway was not intended to serve Gilsonite mines, but rather oil development. SR 264 began at US 40 east of Jensen and ran south along the east bank of the Green River along what is now Red Wash Road, then turned southeast to the Red Wash Oil Field. The road can be seen on this USGS map.


SR 264 received a few minor realignments in 1965 to straighten the roadway out, but they didn't last long as the whole route was decommissioned in 1969. That left SR 45 from east of Jensen to Bonanza as the only state highway south of US 40 in the area.

Over the next decade, Uintah County built two roads connecting to Red Wash Road: one running northwest from the Green River to US 40 at Naples, and the other southeast from Red Wash to SR 45 north of Bonanza. In 1982, SR 45 was realigned to use those, which brought it to its current northern terminus in Naples. The Old Bonanza Highway reverted to a county road at this time.

At the same time, 45 was extended south from Bonanza again, but this time it only extended as far as Dragon Road. This didn't exactly follow the pre-1968 routing: in particular, a new, straighter alignment was built near the White River, along with a new bridge over the river.


Those 1982 realignments were apparently done because of an expected traffic increase due to the White River oil shale mine. The new bridge is impressive enough that it's hard to imagine a rural jurisdiction like Uintah County maintaining it, which is probably why 45 now ends where it does. In fact, the new terminus at Dragon Road is the very next major intersection after that bridge.

No changes have been made to SR 45 since. Today, the primary sources of what little traffic uses this route are oil and natural gas extraction and the Deseret Power Plant, located about 10 miles north of Bonanza.

If you're still confused, here's a map overview of the various routes and alignments that have existed in this area. SR 45 is shown in red, SR 207 in blue, and SR 264 in green: 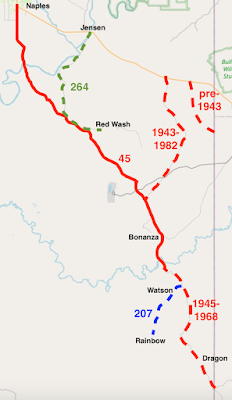