Natural Bridges and the Bicentennial Highway

A recent trip down to southeast Utah took me along the length of State Route 95. I was expecting a pretty drive, but I was blown away by how ridiculously scenic it was. I would say it's the second best road I've been on in the whole state, after only SR 12.

Here is how the area looked on that year's UDOT map:

This looks like the modern route, and it performed a similar function ... but as it turns out, this is almost entirely a different alignment than the one SR 95 now follows. Let's look at both ends in some detail. Today, Natural Bridges vehicle access is all between White and Armstrong Canyons... but back in 1935, there were no roads north of Armstrong. SR 95 began just south of Owachomo Bridge and followed what's today a dirt road and part of 95 around the bottom of Armstrong.

Upon leaving the immediate Natural Bridges vicinity, 95 ran north and east along today's San Juan CR 228 and CR 268. This route passed directly between the two Bears Ears and through the southern foothills of the Abajo Mountains before entering Blanding. In Blanding, it used some combination of streets (probably 400 West, 400 North, 300 West, and Center Street) to get to the center of town, where it ended at its junction with SR 47 at Main Street.

In 1949, the state legislature extended the route significantly to the northwest from Natural Bridges. It's a little unclear what happened with the road directly into Natural Bridges, which became a ~1.5 mile spur off SR 95. Although it could have been maintained by the state as a spur of 95, it seems more likely that it was taken off the state system - probably given to the National Park Service to maintain.

At any rate, the new extension of 95 crossed the Colorado River at Hite and continued on to SR 24 at Hanksville, where the road configurations were slightly different than today. SR 95 came in from the southeast along what's now labeled BLM 0105 on many maps before entering town from the south along 100 East. Unlike the present day, at the time SR 24 jumped south from 100 North to Main Street between 100 West and 100 East. So the original west end of 95 was at the intersection of 100 East and Main Street:

The overall 1949 extension of SR 95 first appeared on the state highway map in the 1951 edition. Here is what that looked like:

Couple things to note here. One is that it is clear the mapmakers wanted to give no illusions that this would be anything near highway grade. Not only is it marked as a gravel road almost the entire way with a small graded section in the Bears Ears area, but the whole thing is also labeled "TRAIL (CARRY WATER)" - can't imagine seeing that on a DOT map today! Another is that there was no bridge over the Colorado River at Hite... so the highway had to descend all the way to river level and then cross the river on a toll ferry. South of the river, the route reached river level by dropping down Farley Canyon and the lowest portion of White Canyon, which joins with the Colorado at Hite. On the other side, the route followed the north bank for a mile or two before turning up the canyon of North Wash.

At any rate, this was the first continuous state highway between the Hanksville and Blanding areas. It should be noted, though, that just about the entire route was unpaved. A tremendous amount of realignments would follow over the next few decades, as the state worked to gradually improve and pave the road.

The first one covered most of the highway's portion in San Juan County, from Natural Bridges east to Blanding. While the old alignment had gone directly through the Bears Ears and ended in downtown Blanding, the new alignment passed south of the Bears Ears and ended at SR 47 about 4 miles south of Blanding. This first appeared on the 1954 state map, but bridge data suggests it was not complete until 1958 or 1959, by which point most of the road had been graded:

The next major realignment would come about due to the construction of Glen Canyon Dam in Arizona, creating Lake Powell extending back up the Colorado River well into Utah. This would result in the original alignment and crossing at Hite becoming unusable due to high water. As a result, in November 1962, the Utah State Road Commission approved the relocation of SR 95 onto a new routing to the east, involving two large arch bridges spanning the Colorado and Dirty Devil Rivers. The legislature approved this change in 1963, but the new routing would not open until 1965. The 1962 resolution map is shown below, with the old alignment in red and the new one in green:

In December 1963, the state road commission approved a relocation of SR 24 near Hanksville, rerouting it entirely out of town and staying north of the Fremont River. SR 95 in turn would be extended west along 24's former alignment through Hanksville (along Main, Center, and 100 North) then northwest across a new Fremont River bridge to the new 24 alignment. That was shown on the following map:

However, none of the new 24 alignment east of the 95 junction was ever built. The new road northwest out of Hanksville was built... but it became the route of SR 24 into Hanksville from the west instead. No changes was made at this time to SR 95, which still ended on 100 East at Main Street.

A few years later, in 1966, the State Road Commission approved a whole new alignment for SR 95 between Cottonwood Wash and North Wash (essentially, between today's 95/276 junction and Hite). That is shown on the map below:

That left the section between Hanksville and Trachyte Junction as more or less the only 95 segment not to have received a significant realignment since it was first created. Any guesses what happened in 1969? If you figured it got a realignment, you were right - a brand new roadway was built for pretty much this entire road segment. This stretch was so long it actually took the state department of highways two maps to fully illustrate the realignment. Those maps are shown below: 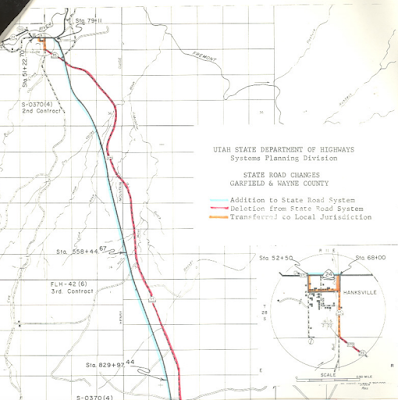 As those maps show, the new roadway was for the most part east of the old one, except for in the immediate vicinities of Trachyte and Hanksville. This was also significant in that for the first time, the actual western terminus of the route in Hanksville was moved. Instead of ending at the center of town, the new alignment approached town from the southeast and ended at SR 24 several blocks east of the town center. UDOT also took this opportunity to move SR 24 to 100 North through central Hanksville, removing the jog it had taken down to Main Street.

A few years later, several minor realignments were made in the vicinity of Natural Bridges National Monument. They are shown on this planning map:

That also illustrates that by 1970, a new road had been built to serve the northern side of Natural Bridges, effectively replacing the old road in from the south (though that is still visible on the map). Presumably, the portion within monument boundaries was always maintained by the Park Service, while the portion outside them was probably a San Juan County road at first. But in 1975, the legislature added the road northwest from SR 95 to the National Monument boundary to the state system as SR 275. That route still exists today and has not changed since.

But before that could happen, part of SR 95 would undergo yet another major realignment. This time, the affected portion of 95 was between Natural Bridges and a point several miles west of Blanding. (Yes, this was major realignment #2 for that section.) Once again, this was so lengthy that the highway department needed two maps to fully illustrate it. On these maps, new alignments are shown in green, old alignments transferred to local jurisdiction are in orange, and old alignments to be abandoned are red:

That was approved by the State Road Commission in 1972, but based on bridge data the new alignment did not open for at least another year (if not a bit longer). When it did, it marked the completion of a fully paved SR 95 at long last. The new road was dedicated in 1976, the year of the U.S. Bicentennial - hence the Bicentennial Highway nickname for 95.