It's been way too long since I've posted something, so here's a post about the various routes that have served Provo Canyon through the years.

Almost from the beginning, Provo Canyon has been one of the most important corridors in Utah. It has been used as a transportation corridor dating back to prehistoric times, when the Timpanogos Ute people used it as part of their route between the Utah Valley and Uinta Basin. Today, it contains a mostly four-lane highway connecting the cities of Provo and Heber City, and also forms part of a southeastern bypass of Salt Lake City. 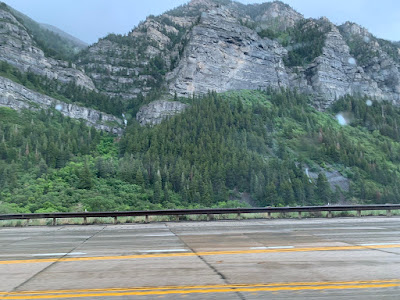 There has been a road in Provo Canyon dating all the way back to 1858, when early Mormons opened a toll road through the canyon to allow for easier travel to the Heber and Kamas Valleys. About 40 years later, the Denver and Rio Grande Western Railway built a line through the canyon, branching off its mainline at Provo and running northeast to Heber.

Obviously the road has received a lot of improvements since it was first built, but even back in the 1910s it was recognized as one of the most important roads in Utah. As such, it was added to the state highway system in 1912. In 1919, when state highways were first written into Utah law, the road was designated in section O of the highway code (along with the road from Heber north to Kimball Junction). And sometime in the early 1920s, the Heber-Provo road became SR 7.

It didn't make the map above, but in 1923, a branch near the south end was added to the state highway system. The new branch route connected SR 7 at Olmstead (located at the mouth of Provo Canyon) to State Street in Orem (SR 1) along 800 North. At first this wasn't numbered, but when unnumbered state highways were eliminated in 1927, it became a spur of SR 7.

There were a fair amount of these relatively short spurs across the state, so in 1931, almost all of them were split off as their own route. So at that time, the spur to Orem was renumbered to SR 52 - a designation that persists today.

In the late 1930s, a major dispute occurred between Utah and Wyoming over the routing of an extended US 89. I'll discuss this dispute more in a future post, but one of the outcomes of that dispute was that a new US 189 was created from US 91 and newly-extended US 89 in Provo northeast through Heber and into Wyoming towards Evanston. With this creation, SR 7 ceased to be a signed route, becoming simply a legislative designation for US 189.

Below is my understanding of the US routes and corresponding legislated state routes in the Provo area immediately after US 189 was commissioned. 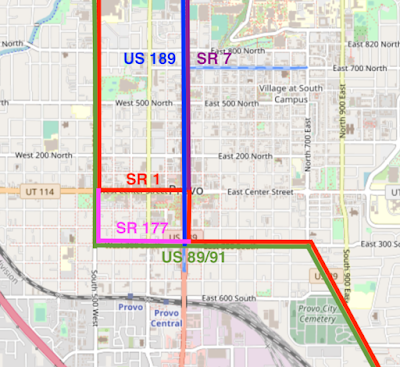 As that map shows, US 189 was not entirely consistent with SR 7 due to a US 91 realignment in Provo in the 1930s. By the time US 189 was created, US 91 had been moved off of Provo's Center Street and onto 500 West and 300 South...but this route was internally referenced as SR 177, and SR 1 was kept on the old alignment. So SR 7 ended at Center Street, where it met SR 1. The old alignment along Center and University was designated Alt US 91:

It is not fully clear whether US 189 ran all the way to 300 South from the beginning. Potentially US 189 may have still ended with SR 7 at Center Street for a while, with Alt 91 alone covering the last few blocks. But it seems more likely US 189 would have been signed all the way through to 300 South - with an overlap on Alt 91 - so that it could connect with the mainline of its "parent" route, US 89.

North of Provo, US 189 followed (and still follows) the SR 7 corridor all the way to Heber, but a few realignments have happened. The original SR 7 closely followed the Provo River through Provo Canyon up to Charleston, and the Charleston bypass did not exist. SR 7 passed through town on what is now SR 113 and 3600 South before continuing its northeastward route to Heber:

That changed with the construction of Deer Creek Dam on the Provo River, about halfway between Charleston and Wildwood (the location of the modern SR 92 junction). The dam created a reservoir that flooded much of SR 7, so a new alignment was built along the south side of the new lake. US 189 was probably never signed on the old road underneath the reservoir, but it's unclear whether the new road on the south side opened before US 189 was created. If it was, it would have been signed SR 7 for a year or so before that became a hidden designation.

Presumably, the Charleston bypass was built in conjunction with this new Deer Creek alignment - and even if it wasn't built right away, it was there by 1950:

189 and 7 also followed an alignment that was significantly further east between Provo and the mouth of Provo Canyon. Originally, University Avenue did not extend past the Provo downtown area, so US 189 veered slightly east onto Canyon Road and followed that through the eastern Provo benches to Olmstead. (This, by the way, is why the BYU campus boundary follows Canyon Road instead of the expected University Avenue.)

If you look closely at the modern US 189 alignment on University Avenue north of downtown Provo, you'll notice it's not straight...or even close to it. This is quite unusual for a Utah city street, and the reason is because the right-of-way it sits on was originally the Denver and Rio Grande Western Railroad's Provo Canyon Branch. By the mid-1960s, rail traffic on the branch line had been declining for many years, and the railroad announced plans to abandon it. It became obvious to UDOT that this would provide a perfect opportunity to realign and expand US 189 between Provo and Olmstead, and in 1967, US 189 was realigned onto a new roadway immediately adjacent to the rail line (which was officially abandoned the next year).

Below is a USGS topo from 1986. The modern route of US 189 is shown, but the old Canyon Road alignment to its east is easy to spot as well:

This probably would have been the final configuration of both SR 52 and US 189...if I-15 hadn't been built. Planning for the interstate began in the late 1950s, and part of that included extending or creating several state routes to connect to the new freeway. So in 1959, SR 52 was extended west from US 89/91 to a junction with the proposed I-15.

To me, the most interesting thing about that map is not that SR 52 was being extended, but that early plans called for Orem to be served by two half-diamond interchanges, one at Center Street and one at 800 North - and apparently that's how it was built at first! The missing movements at both interchanges had been completed by about 1970 - at least five years after I-15 first opened.

Anyway, the legislature approved that SR 52 extension in 1963. But the very next year, the commission extended it west once again, this time to Geneva Road (SR 114), and it was approved by the legislature the following year.

Of course, US 189 had to connect to I-15 as well. In 1961, US 189 and its underlying SR 7 were extended south along University Avenue to the new interchange at I-15. That was confirmed by the legislature in 1963, along with a reroute of SR 1 to follow 89/91 through Provo - otherwise there would have been a three-block SR 1/7 concurrency.

SR 7 was deleted in the 1977 renumbering that eliminated the unsigned legislative state routes, but other than that, no changes have occurred in the extent of SR 52 or US 189 south of Heber (although north of Heber is a whole other story that I'll save for a future post). But several intersection and interchange configurations have changed since then. SR 52's interchange at I-15 was upgraded from a diamond to a SPUI in 2012 as part of the I-15 CORE project, but US 189 has seen some far more interesting developments. The junction between US 189 and SR 52 itself got a flyover ramp in 1984, making it one of very few nonfreeway grade separations in Utah.

But still more interesting is the evolution of the southern terminus of US 189. Originally it was a simple trumpet:

Then in 2000, the junction was slightly reconfigured to allow for a new road, 1860 South, to be built to the east. While the direct ramps from US 189 to both directions of I-15 were maintained, and 1860 South got a direct ramp to northbound 15, drivers heading from southbound I-15 to northbound 189 were now forced to make a left turn:

Things got even more confusing when the Lakeview Parkway, a city-maintained arterial connecting the southern and western sides of Provo, opened in 2016. The current interchange is essentially what happens when you run a road right through the middle of a trumpet:

That added a new intersection on the west side of the interchange, so as a result, the ramp from 189 to southbound I-15 is no longer fully free-flowing, and traffic going from I-15 south to 189 north must now make two turns. In addition, a left turn across 189 was added to allow eastbound Lakeview Parkway traffic access to I-15 north.

So where does US 189 actually end? Well, if you ask the signs, the answer is at that eastern intersection between University Avenue and 1860 South, where there is an END 189 sign posted. That's a rather poor place to put the sign in my opinion, since the vast majority of southbound traffic is probably headed for I-15 and will have already exited.

Photos above SR 52 were all taken June 2019, except for two from August of that year (should be obvious which ones). The ones south of 52 were taken January 2019.

Bit of a disorganized and limited photo set for SR 52, but here we go. These photos more or less proceed in either direction from the US 89 junction. The westbound ones are taken June 2019 except for one in January (again, should be obvious which one that is), while the eastbound ones are all January 2019.

And now for a few eastbound photos from January 2019: